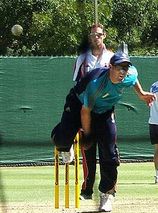 Description:
Michael Edward Killeen Hussey (born 27 May 1975) is an Australian cricketer, a left-handed specialist batsman. Hussey is also widely known by his nickname Mr Cricket. Hussey was a relative latecomer to both the one-day international and Test Australian teams, debuting at 28 and 30 years of age in the respective formats, with 15,313 first-class runs before making his Test debut. However, he has had a highly successful international career, being the top-ranked ODI batsman in the world in 2006. He plays first-class cricket as vice-captain of the Western Warriors in Australia and has played for three counties in England. He also plays in the Indian Premier League for the Chennai Super Kings, although he opted out of the 2009 season.

Hussey initially played for his native Western Australian Warriors, and his career total of 6471 runs ranks eighth in the list of that state's run-makers in the Sheffield Shield. He then moved to England, where in July 2001 he scored an unbeaten 329 (a Northamptonshire club record) at Wantage Road in his side's 633 for six declared on the way to a 10-wicket victory. He later captained Northamptonshire. In August 2003 he surpassed his own Northamptonshire record, when he scored 331 not out against Somerset at Taunton.

When Hussey was playing for the......
Read More