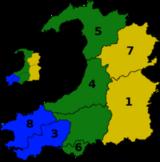 Each constituency elects one Assembly Member by the first past the post electoral system, and the region as a whole elects four additional or top-up Assembly Members, to create a degree of proportional representation. The additional member seats are allocated from closed lists by the d'Hondt method, with constituency results being taken into account in the allocation.

The constituencies have the names and boundaries of constituencies of the House of Commons of the Parliament of the United Kingdom (Westminster). For Westminster election purposes, however, there are no electoral regions, and constituency boundary...
Read More