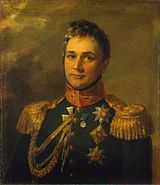 Description:
Prince Mikhail Semyonovich Vorontsov () (30 May 1782&ndash;18 Nov 1856), was a Russian prince and field-marshal, renowned for his success in the Napoleonic wars, and most famous for his participation in the Caucasian War from 1844 to 1853.

The son of Count Semyon Vorontsov and nephew of the imperial chancellor Alexander Vorontsov, he spent his childhood and youth with his father in London, where he received a brilliant education. During 1803&ndash;1804 he served in the Caucasus under Pavel Tsitsianov and Gulyakov, and was nearly killed in the Zakatali disaster (January 15, 1804). From 1805 to 1807 he served in the Napoleonic wars, and was present at the battles of Pułtusk and Friedland. From 1809 to 1811 he participated in the Russo-Turkish War and distinguished himself in nearly every important action.

He commanded the composite grenadiers division in Prince Petr Bagration's Second Western Army during Napoleon's invasion of Russia in 1812. At the battle of Borodino his division was in the front line and was attacked by three French divisions under Marshal Davout. Vorontsov led several counter-attacks, sword in hand. Of the 4,000 men in his division only 300 survived the battle. Vorontsov was wounded, but recovered to rejoin the army in 1813. He commanded a new grenadiers division and fought at the battle of Dennewitz and the battle of Leipzig. In 1814, at Craonne, he brilliantly held out for a day against Napoléon in person. He was the commander of the corps of...
Read More