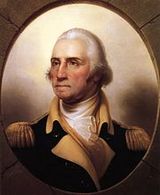 Description:
The military career of George Washington spanned over forty years of service Washington's service can be broken in three periods (French and Indian War, American Revolutionary War, and the Quasi-War with France) with service in three different armed forces (British provincial militia, the Continental Army, and the United States Army).

Because of Washington's importance in the early history of the United States of America, he was granted a posthumous promotion to General of the Armies of the United States, legislatively defined to be the highest possible rank in the US Army, more than 175 years after his death.

Born into a well-to-do Virginia family near Fredericksburg in , Washington was schooled locally until the age of 15. The early death of his father when he was 11 eliminated the possibility of schooling in England, and his mother rejected attempts to place him in the Royal Navy. Thanks to the connection by marriage of his half-brother Lawrence to the wealthy Fairfax family, Washington was appointed surveyor of Culpeper County in 1749; he was just 17 years old. Washington's brother had purchased an interest in the Ohio Company, a land acquisition and settlement company whose objective was the settlement of Virginia's frontier areas, including the Ohio Country, territory north and west of the Ohio River. Its investors also included Virginia's Royal Governor, Robert...
Read More