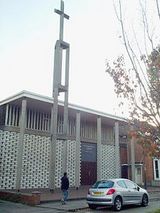 Description:
The Missionaries of St. Charles Borromeo or Scalabrinian Missionaries (abbr.: C.S.) are a Roman Catholic religious order of brothers and priests founded by Giovanni Battista Scalabrini, Bishop of Piacenza in Italy, in 1887. Its mission is to "maintain Catholic faith and practice among Italian emigrants in the New World." Today, they and their sister organizations, the Missionary Sisters of St. Charles Borromeo (founded by Scalabrini on 25 October 1895) and Secular Institute of the Scalabrinian Missionary Women (founded 25 July 1961) minister to migrants, refugees and displaced persons.

The order was approved in principle by Pope Leo XIII in a Brief dated 25 November 1887 and its constitution definitively approved by a decree of the Sacred Congregation of Propaganda on 3 October 1908.

The expediency of providing for the spiritual — and also, in some degree, for the temporal — needs of Italian emigrants to the Americas was forcibly brought home to Bishop Scalabrini by the pathetic spectacle of a number of such emigrants waiting in the great railway station of Milan. Acting upon this inspiration, and encouraged by Cardinal Simeoni, then Cardinal Prefect of Propaganda, the bishop acquired at Piacenza a residence which he converted into "The Christopher Columbus Apostolic Institution," forming there a community of priests which was to be the nucleus of a new congregation.

This congregation, which was henceforth to be known as the Missionaries of...
Read More