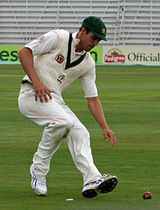 Description:
Mitchell Guy Johnson (born 2&nbsp;November 1981 in Townsville, Queensland) is an Australian cricketer. He is a left-arm fast bowler and left-handed batsman. He was awarded the International Cricket Council's 2009 "Cricketer of the Year" award, the Sir Garfield Sobers Trophy.

When attending a fast-bowling clinic in Brisbane at age 17, former Test fast-bowler Dennis Lillee identified him as a "once-in-a-lifetime prospect". Lillee contacted former team mate Rod Marsh and arranged for Johnson to join the Australian Cricket Academy in Adelaide. Johnson subsequently played for the Australian Under-19 side that toured England in 1999, however recurrent back injuries hampered his prospects. He recovered to start his first-class career two years later, when he was selected to play state cricket for his native Queensland. Playing for Queensland against New Zealand, Johnson hit a six off the first ball he faced in first-class cricket. In September 2005, he was in the Australia A cricket team that toured Pakistan.

Johnson switched from the Queensland Bulls to the Western Warriors on 25&nbsp;July 2008.

Johnson was chosen to be in the squad for the first Ashes Test beginning on 23&nbsp;November 2006, but was 12th man in all of the games. On 10&nbsp;November 2007, while making his Australian Test match debut against Sri Lanka at his home ground...
Read More