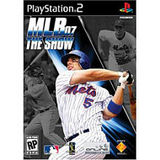 MLB 07 The Show makes the transition to next-gen with a suite of advanced features in its race to become MVP of 2007's baseball crop. The all-new Road to The Show mode enables gamers to play both offense and defense from the created player's perspective. Providing an even more realistic experience from the mound, the all-new New Pitch Command System (PCS) delivers comprehensive strategy to pitch selection, as a pitcher's "pitch comfort" will be predetermined based on a best to worst pitch scenario. It is up the gamer to decide if he/she should try to "work on a pitch" or just go with what is working....
Read More