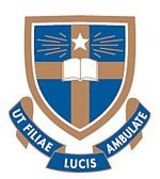 Description:
MLC School is an independent day school for girls, located in Burwood, Sydney. Founded in 1886, MLC admits students from pre-kinder age through to Year 12, and is a Uniting Church of Australia school.

MLC School, originally known as Methodist Ladies College, was founded in 1886, primarily to prepare students for entrance to the University of Sydney, which had recently admitted women to degrees.

The School Song with music by Australian composer. Lindley Evans, who was a teacher at the School during the 1930s, to lyrics by Poet Laureate John Masefield.

A fire destroyed the boarding area, dining room, offices and some classrooms in 1977 and the boarding program was discontinued as a result.

MLC School is now a day school in the Uniting Church of Australia. In June 1977, when the Methodist Church was subsumed into the new union of the Methodist, Presbyterian and Congregational Churches the Methodist Ladies College Burwood became known officially as MLC School.

More recently, a number of facilities at the school have been designed and constructed by architects Ed Lippmann and Associates, starting with the MLC Aquatic centre was opened by Dawn Fraser AO in 2003. More recently, the Junior School was completed and opened in 2009 by Her Excellency Quentin Bryce AC. The facilities available in the Junior School include flexible learning spaces, learning studios, small group areas, wet areas, a literature and resource hub, outdoor learning and play...
Read More