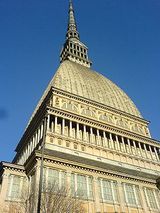 Description:
The Mole Antonelliana is a major landmark of the Italian city of Turin. It is named for the architect who built it, Alessandro Antonelli. In Italian "Mole" (literally, "size") indicates a building of monumental proportions. Construction began in 1863 and was completed 26 years later, after the architect's death. Today it houses the National Museum of Cinema, and it is believed to be the tallest museum in the world.

The building was conceived and constructed as a synagogue. The Jewish community of Turin had enjoyed full civil rights since 1848, and at the time the construction of the synagogue began, Turin was the capital of the new Italian state, a position it held only from 1860 to 1864. The community, with a budget of 250,000 lire and the intention of having a building worthy of a capital city, hired Antonio Antonelli. Antonelli was notable for having recently added an "idiosyncratic" 121 metre-high dome and spire to the seventeenth-century Church of San Gaudenzio at Novara. He promised to build a synagogue for 280,000 lire. The relationship between Antonelli and the Jewish community was not a happy one. He immediately began to propose a series of modifications which raised the final height to 167 meters, over 46 meters higher than the dome in the original design. Such changes, in addition to greater costs and construction time than were originally anticipated, did not please the Jewish community and construction was...
Read More