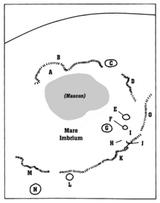 Description:
Montes Jura is a mountain range in the northwest part of the Moon (of the side that we see). The selenographic coordinates of this range are 47.1° N 34.0° W, and it has a diameter of 422&nbsp;km. They were named after the Jura Mountains in western Switzerland.

This range of mountains form a visually pleasing semi-circular ring around the Sinus Iridum, a bay along the northwestern edge of Mare Imbrium. The protruding part of the range at the southwestern end is named Promontorium Heraclides, while that at the northeast end is called Promontorium Laplace. As the terminator advances near this range, the peaks of this range catch the sunlight at their tops. This produces a string of bright points that have been described as the 'jewelled handle' effect.

In the distant past this range once formed the outer wall of a crater about 260&nbsp;km in diameter. The southeast face of this crater was then removed and the interior flooded with basaltic lava. As a result the side of the range facing the mare ends in the nearly level plains, which the opposite side merges with a region of rough and irregular terrain.

The only crater of note in this range is Bianchini, which lies across the north-northwestern portion of the curve. A little farther to the west is Sharp, and to the northeast is the ruined crater Maupertuis.