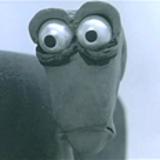 Description:
More is a 1998 short film created by Mark Osborne using stop motion animation. More has won several awards, and was nominated for an Academy Award as Best Animated Short Film in 1998.

More tells the story of an inventor who lives in a drab, colorless world. Day by day, he toils away in a harsh, dehumanizing job, his only savior being the memories of the bliss of childhood. But at night, he works secretly on an invention that could help him relive those memories and spread their joy to everyone in his despair-filled life.

When he finishes his invention, it changes the way people look at the world. But his success changes him, for with it, he loses an important part of himself.

More was written and directed by Mark Osborne, and created by a team that included, among others, Keith and Shannon Lowry, Rick Orner, Nick Peterson, and David Candelaria. Although it was only a 6-minute short, it was, as Osborne put it, an "absolutely massive undertaking"—as it was the first short to be shot using the IMAX format. In addition, it was filmed using stop motion, a much more time-consuming method than live-action filming techniques.

Filming More took nine months, and it was first screened in fall of 1998. While it had a positive critical reception—including an Academy Award nomination—it soon became apparent that there was little that could actually be done with it in the range of publicity. The hype died down eventually, and Osborne...
Read More