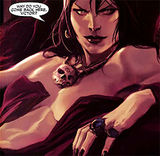 Description:
Morgan le Fay is a fictional character in the , based loosely on the Morgan le Fay of Arthurian legend. In this version of the character, she is the half-faerie half-sister of the mythic Arthur. Her elven heritage granted her immortality, and she used this time to master the mystic arts. She occasionally tries to take over the world. She has been an opponent of The Avengers, and in the 1970s, she was the major villain in the original Spider-Woman comic, and was opposed by a reincarnation of her "ancient foe" and former lover of Magnus and Doctor Doom. She was a member of the Darkholders for a time.

Morgan le Fay first appeared in Atlas Comics in Black Knight #1 (May 1955), written by Stan Lee and illustrated by Joe Maneely. She was introduced into Marvel Comics in Spider-Woman #2

Morgan Le Fay was born in Tintagil Castle, in Cornwall, England, in the days of Camelot, in the Sixth Century A.D. She became a high priestess, and the leader of the Sixth Century cult of the Darkhold, as well as Queen of Gorre (a section of Britain). She was a nemesis for the original Black Knight.

Morgan Le Fay first projected her astral form from her physical body in the Sixth Century A.D. to the present day. She mentally dominated "Slapper" Struthers, transforming him into the superhuman Excaliber, and directed him to kill the original Spider-Woman.Spider-Woman #2 She sent her astral form to get the...
Read More