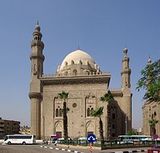 Description:
The Mosque-Madrassa of Sultan Hassan is a massive Mamluk era mosque and madrassa located near the Citadel in Cairo. Its construction began 757 AH/1356 CE with work ending three years later "without even a single day of idleness". At the time of construction the mosque was considered remarkable for its fantastic size and innovative architectural components. Commissioned by a sultan of a short and relatively unimpressive profile, al-Maqrizi noted that within the mosque were several "wonders of construction". The mosque was, for example, designed to include schools for all four of the Sunni schools of thought: Shafi'i, Maliki, Hanafi and Hanbali.

Sultan Hasan's low profile seems inconsistent with the massive undertaking that was his mosque, but the mosque's grandeur makes sense given Sultan Hasan's dramatic life. Sultan Hasan ascended the throne at the age of 13 in 748 AH/1347 CE. When he reached maturity in 1350, he arrested the Emir Manjaq who controlled all of the state's affairs. Prior to that arrest, the emir was restricted to an allowance of just one hundred dirham per day. This pocket change was collected by servants for the Sultan. It's especially striking considering that during that time, the emir Shaykhu was estimated to have an income of 200,000 dirham per day. This deprivation may be viewed as a prompt for his later...
Read More