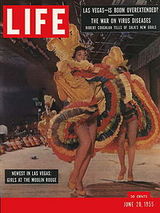 Description:
The Moulin Rouge Hotel was a hotel and casino located in the West Las Vegas neighborhood of Las Vegas, Nevada, that is listed on the United States National Register of Historic Places. The first desegregated hotel casino, it was popular with many of the black entertainers of the time, who would entertain at the other hotels and casinos and stay at the Moulin Rouge.

The Moulin Rouge opened on May 24, 1955, built at a cost of $3.5 million. Until that time almost all of the casinos on the Strip were totally segregated—off limits to blacks unless they were the entertainment or labor force.

The hotel was located in West Las Vegas, where the black population was forced to live. West Las Vegas was bounded by Washington Avenue on the north, Bonanza Road on the south, H Street on the west, and A Street on the east.The establishment was a model of eye-catching, 110 rooms, a gorgeous showroom, swimming pool, restaurant/coffee shop, dress-shop, and bar which was constructed of highly polished and expensive hardwoods.

References to Paris are numerous: