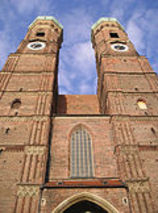 Description:
The Frauenkirche (full name Dom zu unserer lieben Frau, "Cathedral of Our Dear Lady") is a church in the Bavarian city of Munich that serves as the cathedral of the Archdiocese of Munich and Freising and seat of its Archbishop. It is a landmark and is considered a symbol of the Bavarian capital city.

The church towers are widely visible because of local height limits. The city administration prohibits buildings with a height exceeding in the city center. Since November 2004, this prohibition has been provisionally extended outward and as a result, no buildings may be built in the city over the aforementioned height. The south tower is open to those wishing to climb the stairs and offers a unique view of Munich and the nearby Alps.

The cathedral, which replaced an older romanesque church built in the 12th century, was commissioned by Duke Sigismund and erected by Jörg von Halsbach. For financial reasons and due to the lack of a nearby stone pit, brick was chosen as building material. Construction began in 1468. Since the cash resources were exhausted in 1479 Pope Sixtus IV granted an indulgence. The two towers were completed in 1488 and the church was consecrated in 1494. However, the building's famous domes atop each tower were not added until 1525. Their design was modelled on the Dome of the Rock in Jerusalem, which in turn took a lead from late......
Read More