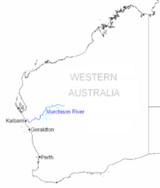 Description:
The Murchison River is the second longest river in Western Australia. It flows for about 780&nbsp;km (490 miles) from the southern edge of the Robinson Ranges to the Indian Ocean at Kalbarri. It has a mean annual flow of about 200 million cubic metres.

The Murchison River arises on the southern slopes of the Robinson Ranges, about 75 kilometres north of Meekatharra in central Western Australia. From there it flows in a westerly direction for about 130 kilometres to its juncture with the Yalgar River, then west for another 100 kilometres before turning south-south-west for 120 kilometres, at which point it is joined by the Roderick River, about 30 kilometres east of the Murchison Settlement. Another 70 kilometres to the south-south-west it meets its other important tributary, the Sanford River. Over the next 100 kilometres it makes a number of sharp turns, taking it about 70 kilometres to the west. It then flows to the southwest, passing under the North West Coastal Highway at the Galena Bridge. Entering the Kalbarri National Park, it flows first to the north-west and then to the north, flowing through the Murchison Gorge, and passing through a number of tight bends known as the Z Bend and The Loop respectively. It eventually turns to the south-west, passing through one more dogleg before disgorging itself into the Indian Ocean at Kalbarri, the only settlement at any point along the river.

Murchison Gorge is deep gorge in near pristine...
Read More