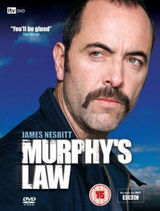 Description:
Murphy's Law is a BBC television drama, produced by Tiger Aspect Productions for BBC Northern Ireland, starring James Nesbitt role from IMDB as an undercover police officer, Tommy Murphy. There were five series of the drama, shown on BBC One. The first two were composed of individual stories. Series three, four and five were each single stories composed over multiple episodes. Colin Bateman adapted the pilot for a novel.

A sixth series has not been commissioned. In a 2008 interview, Nesbitt attributed this to the fifth series' ratings being damaged after it was scheduled opposite ITV's popular drama Doc Martin.Dickson, E. Jane (3–9 May 2008). "Of Muck and Men". Radio Times. BBC Magazines: pp. 22–23..

Murphy is an uncompromising, sometimes tough talking cop. He has no issues with using his charm and sense of humour to attempt to impress any woman, especially Annie, his colleague and later boss.

Murphy was previously married with a young daughter, in Northern Ireland. There, his family were taken hostage and he was forced to make a choice; either carry a bomb and blow himself up in a local barracks, or have his daughter killed. He originally chose the first option but when he got to the barracks he couldn't go through with detonating a bomb that would kill two hundred people. When he got back to the house, he found that they had slit his...
Read More