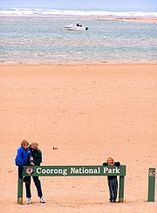 Description:
Murray Mouth () is the point at which the River Murray meets the southern Indian Ocean. The Murray Mouth's location is changeable. Historical records show that the channel out to sea moves along the sand dunes over time. At times of greater river flow and rough seas, the two bodies of water would erode the sand dunes to create a new channel leaving the old one to silt and disappear.

The Murray Mouth is separated from Lake Alexandrina by a row of low islands. The largest one, directly facing the mouth, is Hindmarsh Island. A series of barrages join the islands, separating the salt water from the fresh water of the lakes and river. The barrages can be opened during high river flow.

The original course of the Murray River was to a mouth near Port Pirie where a large delta is still visible protruding into the calm waters of Spencer Gulf. An uplift of the land blocked the river near the southern end of the Flinders Ranges, and the river eventually found its way to a new mouth near Lake Alexandrina.

River Murray water is used by farmers for irrigation in four of Australia's states, as well as supplying water to most towns along the river, and many further away through various pipeline. It...
Read More