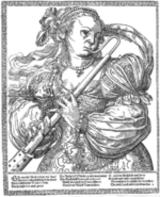 Music In The Elizabethan Era

Music in the Elizabethan era

Description:
Music in the Elizabethan Era, or Elizabethan Music, refers to music during the reign of Queen Elizabeth the I (1533–1603), oft titled The Golden Age of English History. It was a period in which English music was developed to a level that commanded respect from the rest of Western Civilization. After Elizabeth I's death, English music maintained its level of accomplishment for a short while, and fell off (largely after the Revolution) with the change of styles leading to the 'early baroque' period.

Music was highly regarded in the period of the Tudor Dynasty of England, so much so that, by the end of the 16th century, one was not considered to be a gentleman unless he was able to read music and sing tolerably. An anonymous man in 1597 said, “a guest to refrain from singing was considered very rude (From Gail B. Stuart’s Life in Elizabethan London).” Elizabeth's father, Henry VIII, was a musician, among his other talents, and by Elizabeth's time, music had become an established facet of court life.

During the era, most noblemen employed their own musicians and took lessons from them in playing the Lute and music literacy. Those in the rising middle classes employed music teachers. Music, which had been printed since the middle of the 16th century was becoming available at booksellers' shops at a reasonable price; such books included theory books, collections of music for voice and instruments or instruments alone, and instructional books, primarily for the...
Read More