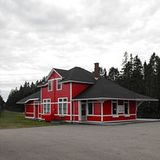 This article is about a community, for the natural harbour, see Musquodoboit Harbour.

Musquodoboit means foaming to the sea. The community is an anglicized version of the Mi’kmaq word Moosekudoboogwek.

The community was settled in the 1780s mainly by Loyalists. Through the late 18th and early 19th centuries many settlers from Scotland, England and Germany immigrated to the area and they still have descendents in the area, evidenced by prominent family names such as Rowlings, Anderson, and Bayers.

Much early travel was by water as roads were rough. Beginning in 1852, the stage coach travelled from Musquodoboit Harbour to Dartmouth and a trip cost 5 shillings. The first automobile was owned by Dr Kennedy in 1909. The Dartmouth Eastern Railway commenced in 1912 to carry lumber and lime from Middle Musquodoboit to Dartmouth. A station was completed in 1918 and today houses the Musquodoboit Harbour Railway Museum, which also serves as the local tourism office in summer. The museum grounds contain a...
Read More