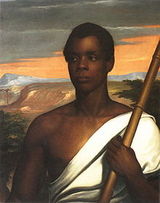 He was born in New Haven, Connecticut, the son of a clockmaker and engraver. He trained as a watchmaker, later taking up drawing, engraving, and oil painting. He studied engraving with George Munger around 1813: they published at least one print together under the name Jocelin & Munger.

From 1820 to 1822 he was in Savannah, Georgia, and established himself as a portrait painter on his return to New Haven. He had a portrait studio in New York City from 1843 to 1847. His New Haven studio burned in 1849, and he gave up painting for engraving, initially with the firm of Toppan, Carpenter & Co. He went on to found the National Bank Note Engraving Company. After Trumbull, he is represented by more portraits in the Yale collection than any other artist.

He painted portraits of Joseph Cinqué and of the abolitionist William Lloyd Garrison. Garrison declared that Jocelyn's portrait was a "tolerable likeness," but remarked that "those who imagine that I am a monster, on seeing it will . . . deny its accuracy, seeing no horns about the head."

Jocelyn retired in 1864 and died at New Haven.