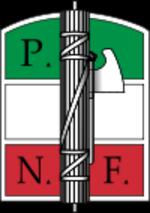 Description:
The National Fascist Party (Partito Nazionale Fascista; PNF) was an Italian political party, created by Benito Mussolini as the political expression of fascism (previously represented by groups known as Fasci; see also Italian Fascism). The party ruled Italy from 1922 to 1943 under an authoritarian, totalitarian system.

It is currently the only party whose reformation is explicitly banned by the Constitution of Italy: "it shall be forbidden to reorganize, under any form whatever, the dissolved fascist party" ("Transitory and Final Provisions", Disposition XII) This paragraph may also apply to the later Republican Fascist Party.

The policies of the National Fascist Party evolved over time. Initially the party harboured anti-clerical and republican values, but always maintained a nationalist agenda combined with degrees of statism and fervent anti-communism. The party adopted large elements of its policies from the authoritarian wing of the former Italian Nationalist Association. The party officially abandoned all republican values when trying to earn the support of the monarchy to form a government. Also, upon coming to power, the party eventually abandoned anti-clerical policies for the tactical purpose of gaining the support of Catholic groups, and later under Mussolini the PNF endorsed the signing of the Lateran Treaty which created the Vatican City and normalized relations between Italy and the Church which had been badly damaged since the...
Read More