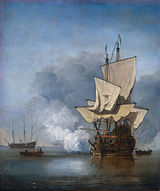 Naval Artillery In The Age Of Sail

Naval artillery in the Age of Sail

Description:
Naval artillery in the Age of Sail encompasses the period of roughly 1571-1863: when large, sail-powered wooden naval warships dominated the high seas, mounting a bewildering variety of different types and sizes of cannon as their main armament. By modern standards, these cannon were extremely inefficient, difficult to load, and short ranged. These characteristics, along with the handling and seamanship of the ships that mounted them, defined the environment in which the Naval tactics in the Age of Sail developed.

Firing a naval cannon required a great amount of labour and manpower. The propellant was gunpowder, whose bulk had to be kept in a special storage area below deck for safety. Powder Boys, typically 10-14 year old children, were enlisted to run powder from the armory up to the gun decks of a vessel as required.

The firing procedure for a cannon was as follows: A wet swab was used to mop out the interior of the barrel, extinguishing any embers from a previous firing which might cause the next charge of gunpowder to go off prematurely. Gunpowder, either loose or in a cloth or parchment cartridge (in which case it would have a hole made in it with a metal 'pricker' through the touch hole), was placed in the barrel, followed by a cloth wad (typically made from canvas and old rope), and rammed home with a rammer. Next the shot was rammed in, followed by another wad (to prevent the cannon ball from rolling out of the barrel if the muzzle was depressed.) The gun...
Read More