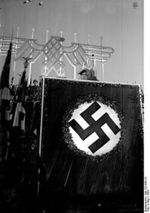 Description:
Speculation about Nazism and occultism has become part of popular culture since 1959. Aside from several popular documentaries, there are numerous books on the topic, most notably The Morning of the Magicians (1960) and The Spear of Destiny (1972).

These books have been discussed by the historian Nicholas Goodrick-Clarke as "the modern Mythology of Nazi occultism" or "the Nazi Mysteries". The recurring element of this "occult historiography" is the thesis that the Nazis were directed by occult agencies of some sort: black forces, invisible hierarchies, unknown superiors or secret societies. Since such an agency "has remained concealed to previous historians of National Socialism," Goodrick-Clarke and the German historian Michael Rissmann have described the genre as cryptohistory. However, there also has been academic research on the potential influence of occultists and paganists on Nazism. This is part of an ongoing debate among historians and political scientists about the religious aspects of Nazism.

<!--By its very nature the study of occult influences on the Nazis attracts sensationalistic authors who often seem to lack the ability or the patience to conform to the scientific method of history. "There is a persistent idea, widely canvassed in a sensational genre of literature, that the Nazis were principally inspired and directed by occult...
Read More