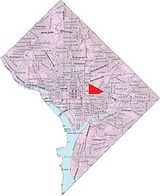 Once a patchwork of several different landowners' claims, most of the land had been ceded to one landowner, Notley Young, under the name of Youngsborough by the 1790s. Youngsborough was included shortly thereafter in the original survey of land for the new national capital, and Young and a few other landowners gave the land to the Federal government in exchange for a promise that Congress would divide the land into lots and return half of those lots to the original landowners.

Once the capital was created, streets were laid out in the grid system that Pierre L'Enfant had designed, with Florida Avenue (then known as Boundary Street) forming the northern border of the city. However, nearly all of the land remained undeveloped, used as farmland to cultivate fruits and vegetables for the fresh market in the more developed sections of the city. The land lots that were used for non-agricultural purposes in the early 19th century were mostly cemeteries.

In the 1830s, the B&O Railroad constructed its Washington Branch, which entered the city of Washington at roughly 9th and Boundary Streets and proceeded through the neighborhood to the downtown area. Its presence gradually led Old City to evolve into a working-class neighborhood: wood and coal yards appeared to...
Read More