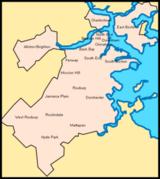 Description:
Boston is sometimes called a "city of neighborhoods." The word "neighborhood" can take on various official and unofficial meanings. There are, however, 21 official neighborhoods in Boston used by the city., at CityOfBoston.gov. Bostonians also have a variety of overlapping districts which they consider neighborhoods, squares, areas, etc. Boundaries established by the city's residential parking districts, the U.S. Postal Service, and a variety of overlapping neighborhood associations serve as unofficial anchors for the terms used in everyday commerce and conversation.

"Neighborhoods" exist on both large and small scales. Brighton (including Allston), Charlestown, Dorchester (including South Boston, Mattapan, and Hyde Park), Roxbury (including West Roxbury, Roslindale and Jamaica Plain), have all at some point been municipalities independent from downtown Boston, providing a source of well-defined boundaries for the largest areas. Neighborhood associations often form around much smaller communities, or around a commercial district (often with "Square" in the name) with a well-defined center but poorly identified extremities.

Boston's leveling and expansion by landfill has influenced the naming of certain neighborhoods, such as the Back Bay, South Cove, and Fort Point. The West End, North End, and South End are no longer at those geographic extremities, due to the annexation of surrounding communities. The names...
Read More