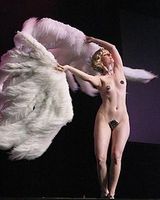 Description:
Neo-Burlesque (or "New Burlesque") is the revival and updating of the traditional burlesque performance. Though based on the traditional Burlesque art, the new form encompasses a wider range of performance styles; Neo-burlesque acts can be anything from classic striptease to modern dance to theatrical mini-dramas to comedic mayhem. As with the earlier burlesque, neo-burlesque is more focused on the "tease" in "striptease" than the "strip". Audiences for neo-burlesque shows tend to be mixed gender, age, race, and class.

Burlesque as a sensation was brought to America from Britain in the late 1860s by Lydia Thompson and her British Blondes, a troupe who spoofed traditional theatrical productions and featured ladies performing men's roles, in costumes considered revealing for the time period. Since that time it has assimilated music hall, minstrel shows, striptease, comedy and cabaret to evolve into the follies of the twenties and thirties to the girlie shows of the 40s and 50s, which eventually gave way to the modern strip club. The adult-oriented 20th Century Burlesque-Striptease, in its various forms, is a unique traditional American Folk Art with the classical burlesque form remaining chiefly a British and European theatrical tradition.

A new generation nostalgic for the spectacle and perceived glamour of the old times has been determined to bring burlesque back. This revival was pioneered...
Read More