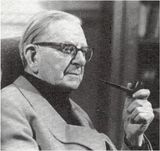 Description:
Sir John Frederick Neville Cardus CBE (3 April 1888 &ndash; 28 February 1975) was an English writer and critic, best known for his writing on music and cricket. For many years, he wrote for The Manchester Guardian. He was untrained in music, and his style of criticism was subjective, romantic and personal, in contrast with his critical contemporary Ernest Newman. Before becoming a cricket writer, he had been a cricket coach at a boys' school. His writing about the game was innovative, turning what had previously been in general a purely factual form into vivid description and criticism.

Cardus was born in Rusholme, Manchester. His year of birth has been the subject of much conjecture. His biographer, Christopher Brookes, and Grove's Dictionary of Music and Musicians record the year as 1889, and Cardus himself celebrated his 70th birthday with a luncheon for a large number of guests at the Royal Festival Hall in April 1959. Both The TimesBarnes, Simon. "Double Score", The Times, 5 December 1987: "3 April 1988 is the centenary of the birth of the late Sir Neville Cardus, something that would have surprised him. He always thought he was born on 2 April 1889, but his birth certificate says not. To mark the occasion, Sir Yehudi Menuhin and John Arlott want to raise money to buy...
Read More