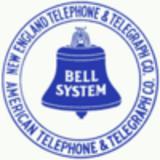 Description:
The New England Telephone and Telegraph Company, more commonly known as New England Telephone, was a Bell Operating Company that served most of New England as a part of the original AT&T for seven decades, from the creation of the national monopoly in 1907 until January 1, 1984, when AT&T was divested of its local operating companies. It became part of NYNEX on that date, and from 1994 the name was no longer officially publicly used (although it was still used internally for portions of operations).

The headquarters of New England Telephone was located at 185 Franklin Street in the Post Office Square area of Boston's Financial District. As of 2009, the building is still used by Verizon Communications, but it has been sold.

Its slogan and jingle was "We're the one for you, New England. New England Telephone."