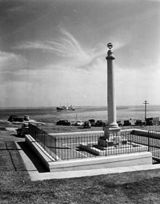 The first official architect for the colony of New South Wales in a role that would become the New South Wales Government Architect was Francis Greenway. He was appointed in 1816 by Governor Macquarie to be Acting Civil Architect and Assistant Engineer responsible to Captain J M Gill, Inspector of Public Works. Greenway was a convict who had been sentenced to transportation for forgery. Greenway's works included the Macquarie Lighthouse on South Head, the Fort on Bennelong Point and the Stables for Government House. Greenway's other major buildings include the Obelisk in Macquarie...
Read More