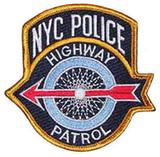 Description:
The New York City Police Department Highway Patrol, also known as the NYPD Highway Patrol or by the shorthand NYPD HWY, is a specialized unit under the auspices of the NYPD's Transportation Bureau primarily responsible for patrolling and maintaining traffic safety on limited-access highways within New York City. The NYPD Highway Patrol's other duties and roles include accident investigations, advanced driver and radar training for NYPD officers, field sobriety testing, dignitary and parade escorts, hazardous material and truck traffic enforcement, anti-drag racing programs, and anti-terrorist checkpoints at key bridges and intersections in the city.

History of the NYPD Highway Patrol

The NYPD Highway Patrol's origins begin in 1911 with the formation of the NYPD's first motorcycle squad, which was formed to meet the challenges of handling increasing traffic danger concomitant with the rise of automobile use. The unit—then simply known as the Motorcycle Squad—was enlarged as automobile traffic and speeding arose as major problems for the city, and in 1929, the unit was expanded to include armored motorcycles for use in anti-gang activities by the NYPD.

In 1933, the unit expanded to include a formally designated "Grand Central Parkway Motorcycle Squad" for patrol on a limited-access highway.

Until 1972, the unit remained primarily focused on the Motorcycle Squad, when in that year the motorcycle division was merged with the NYPD's Accident Investigation Squad...
Read More