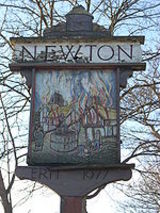 Description:
Newton is a civil parish and small village in Cambridgeshire, England. Situated around 7 miles to the south-west of Cambridge, its lies on the old coaching road between London and Cambridge. Its population in 2001 was 401

The history of Newton has long been tied to that of neighbouring Hauxton; they were ruled by a single manor, were a single civil parish until the 16th century and until 1930 formed a single ecclesiastical parish. There were disputes over the parish boundaries with Harston and Little Shelford until they were finally settled in 1800, when the parish of Newton was set at 402 hectares.

In 970 the land around Newton and Hauxton was passed to King Edgar who offered them to Bishop Aethelwold for the new Abbey at Ely. However, Edgar died before the lands were transferred and the lands were subject to a series of disputes until they were purchased for the Abbey.

At the time of the Domesday Book the lands in modern Newton fell under the manor at Hauxton and both villages remained the property of Ely Abbey until the Dissolution of the Monasteries in 1539. Since then the manor has been owned by the Dean and Chapter of Ely Cathedral.

The village of Newton itself built up around the intersection of the five roads from Harston, Hauxton, Whittlesford, Thriplow and Foxton. It has always been a small village, and in 1801 was home to only 114 people. In 1746 much of the village was...
Read More