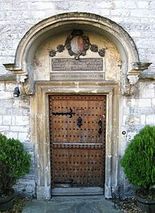 Description:
Newton St Loe is a small Somerset village and civil parish located between Bath and Bristol in England. The majority of the village is owned by the Duchy of Cornwall. The parish has a population of 631.

Newton St Loe takes its name from the first "owner" of the mansion estate "St Loe", which was given to him as a gift by William the Conqueror. St Loe was born and bred in France.

There is evidence of a 3rd century Roman villa on a site between Newton St Loe and Bath on the south side of the River Avon. It was discovered in 1837 during the cutting of the Bristol-Bath railway line when excavations were carried out and drawings of the site made before much of it was lost in the railway construction. Two mosaics were removed, one of which, known as the Orpheus Mosaic, is now in the Bristol Museum and Art Gallery. A further investigation was carried out in 1968 before the widening of the A4 however it is still the case that little is known about the villa.

The parish was recorded in the Domesday Book with the name Niwetone.

There is a history of coal mining in the area as part of the Somerset coalfield but all mines have now closed. Lower and Middle Coal Measures at depths between 500 and 5,000 feet (152-1,525&nbsp;m) of the Pensford Syncline, were worked at the Globe Pit in Newton St Loe in the 19th...
Read More