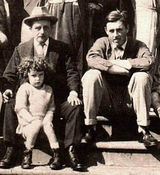 Description:
Nicholas "Nico" Llewelyn Davies (24 November 1903 &ndash; 1980) was the youngest of the Llewelyn Davies boys, who were the inspiration for J. M. Barrie's Peter Pan and the Lost Boys. He was only a year old when Peter Pan, or The Boy Who Wouldn't Grow Up hit the stage in 1904, and as such was not a primary inspiration for the characters of Peter and the Lost Boys. However he was eight years old when the novel adaptation Peter and Wendy was published, and in later editions of the play, the character Michael Darling's middle name was changed to "Nicholas".

When Davies was born, Barrie was already a friend of his brothers and mother Sylvia. Following the deaths of the boys' father Arthur (1907) and mother (1910), Barrie assumed guardianship of them. Two of Davies' brothers died before he was an adult: George was killed in combat in World War I in 1915, Michael drowned with a close friend in 1921. Davies attended Eton College, and started at Oxford University in 1922, but continued to spend holidays with Barrie.

In 1926 he married Mary James, and they had a daughter Laura, born in 1928. In 1935 he joined his brother's publishing firm, Peter Davies Ltd. His brother Jack died in 1959, and Peter committed suicide in 1960. As the last surviving subject of the 1978 BBC mini-series The Lost Boys, he was a consultant to writer Andrew Birkin. He died in 1980.

In the The Lost Boys, he was portrayed at various ages by......
Read More