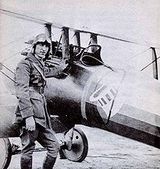 The Nieuport 28 (N.28C-1) was a French biplane fighter aircraft flown during World War I, built by Nieuport and designed by Gustave Delage. Its principal claim to fame is that it was the first aircraft to see service with an American fighter squadron.

By the middle of 1917 it was obvious that the Nieuport 17 was unable to cope with the latest German fighters, and that direct developments of the 17, such as the Nieuport 24bis. were unable to offer a substantially improved performance. In fact, the Nieuport was already being rapidly replaced in French service with the SPAD S.VII.

The Nieuport 28 design was an attempt to adapt the concept of the lightly built, highly maneuverable rotary engined fighter typified by the Nieuport 17 to the more demanding conditions of the times. It had a more powerful engine, and a new wing structure – for the first time a Nieuport biplane was fitted with conventional two spar wings, top and bottom, in place of the sesquiplane "v-strut" layout of earlier Nieuport types. Ailerons were fitted to the lower wings only. The tail unit’s design closely followed that of the Nieuport 27, but the fuselage was much slimmer, in fact it was so narrow that the machine guns had to be offset to the left. nasm.si.edu....
Read More