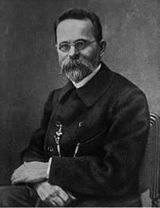 Description:
Nikolai Alexandrovich Morozov (Никола́й Алекса́ндрович Моро́зов; July 7, 1854 &ndash; July 30, 1946) was a Russian revolutionary who spent a quarter of century in prison before turning his attention to various fields of science.

The son of a landowner by a serf woman, Morozov was born in the village of Borok in the Yaroslavl Oblast of Russia. He early became interested in politics and was expelled from secondary school when he was accused of subversive activity (His distribution of a scientific magazine was considered subversive because Russian schools did not teach science). He joined the Circle of Tchaikovsky before departing for Geneva in 1874. He later was a member of Zemlya i volya (co-editing their mouthpiece, Land and Liberty, with Sergei Kravchinsky) and one of the leaders of another revolutionist group, Narodnaya Volya, starting in 1879.

In 1880 Olga Liubatovich and Morozov left Narodnaya Volya and went to live in Geneva and London, where he was introduced to Karl Marx. While in exile Morozov wrote The Terrorist Struggle, a pamphlet that explained his views how to achieve a democratic society in Russia. He advocated large numbers of small independent terrorist groups and argued that this approach would make it difficult for the police to apprehend the terrorists. It would also help to prevent a small group of leaders gaining power, forming dictatorships after the overthrow of the Tsar.