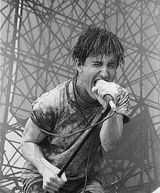 Description:
Nine Inch Nails, an industrial rock band fronted by Trent Reznor, has performed throughout the world, including tours in North America, South America, Europe, Australia, Japan, and China. While Reznor controls the creative and musical direction of Nine Inch Nails in-studio, the touring band performs different arrangements of the songs in live settings. In addition to regular concerts, the band has performed in both supporting and headlining roles at festivals such as Woodstock '94, Lollapalooza 1991 and 2008, as well as many other one-off performances including the MTV Video Music Awards. There are 938 gigs of the band overall, when counted.

Nine Inch Nails' live performances contrast with its in-studio counterpart. Reznor writes and performs nearly all Nine Inch Nails studio material, with occasional instrumental and vocal contributions from others artists. However, Reznor has typically assembled groups of backing musicians to interpret songs for tours and other live performances. Keyboardist Alessandro Cortini said that "if you see the show and you're used to the CDs it's pretty clear that the studio entity is different from the live entity".

The only constant member of the live band is Reznor, who cites the long periods of time between major tours as one reason for the ever-changing live lineup. Live Nine Inch Nails performances are...
Read More