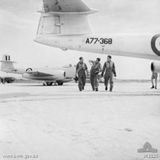 Description:
No. 77 Squadron is a Royal Australian Air Force fighter squadron. The Squadron was formed in 1942 and currently operates F/A-18 Hornet aircraft from RAAF Base Williamtown.

No. 77 Squadron was formed at RAAF Base Pearce on 16 March 1942. Equipped with P-40 Kittyhawk aircraft the squadron was initially responsible for the defence of Perth. The squadron moved to Batchelor near Darwin in August, the first RAAF fighter squadron to be stationed in the area. The Squadron saw action defending Darwin from Japanese air raids and claimed its first 'kill' on 23 November 1942.

In February 1943 the squadron was deployed to Milne Bay in New Guinea. The Squadron flew escort and ground attack operations over New Guinea and the Solomon Islands until September 1944 when it moved to western New Guinea. The Squadron moved to Morotai in April 1945 and conducted ground attack missions over the Netherlands East Indies until June when it was redeployed to Labuan Island to support the Australian Army's operations in Borneo.

Following the Japanese surrender No. 77 Squadron was selected as part of Australia's contribution to the British Commonwealth Occupation Force and, after converting to P-51D Mustang fighters, arrived in Japan in February 1946. Occupation duties proved uneventful, and No. 77 Squadron was preparing to leave Japan for Australia when the Korean War broke out in June 1950.

No. 77 Squadron was committed to action over Korea as part of the United Nations forces, and flew its first...
Read More