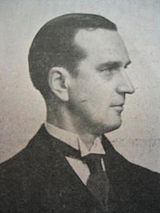 The son of Sir John Skelton KCB LLD, Skelton was born on 1 July 1880 at Hermitage of Braid in Edinburgh and was educated at Glenalmond College, Edinburgh University and at Christ Church, Oxford, to which he won a history scholarship. He was placed in the Second Class in the School of Modern History in 1902 and in 1906 he was called to the Scottish Bar and therefore joined the Faculty of Advocates. Skelton was respected as a lawyer, but dealt mainly with divorce cases and those involving disputed wills. In 1920 he was appointed Junior Counsel to the Post Office, and to the Board of Inland Revenue in 1921. In the First World War, Skelton served with the Scottish Horse as a Lieutenant, Captain, and latterly a Major, in Gallipoli, Salonika, and France, where he was seriously wounded in the last weeks of the war.

Skelton first stood for Parliament at the second general election of 1910, but he lost the East Perthshire Division to his Liberal opponent. Despite his defeat, Skelton remained active in politics, speaking frequently from Unionist platforms across Scotland. He was opposed to Irish Home Rule but was more progressive on issues like land reform, industrial relations and the use of the referendum. At the end of the Great War Skelton stood aside and allowed the Coalition candidate in East Perthshire to be elected unopposed....
Read More