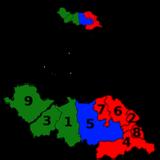 Each constituency elects one Assembly Member by the first past the post electoral system, and the region as a whole elects four additional or top-up Assembly Members, to create a degree of proportional representation. The additional member seats are allocated from closed lists by the d'Hondt method, with constituency results being taken into account in the allocation.