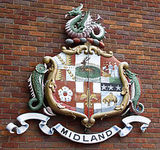 Description:
The Northern Counties Committee (NCC) was a railway that served the north-east of Ireland. Originally constructed to the Irish standard gauge of 5&nbsp;ft 3 in (1600&nbsp;mm), a number of 3&nbsp;ft 0 in (914&nbsp;mm) narrow gauge lines were acquired later. It had its origins in the Belfast and Ballymena Railway that opened to traffic on 11 April 1848.

The NCC itself came into existence on 1 July 1903 as the result of the Midland Railway taking over the Belfast and Northern Counties Railway (BNCR), which the Belfast and Ballymena Railway had become. At the 1923 Grouping of British railway companies, the Committee became part of the London Midland and Scottish Railway (LMS). The line passed to the British Transport Commission with the nationalisation of the railways in Britain in 1948 and in the following year, 1949, it was sold to the Ulster Transport Authority (UTA).

The BNCR and its successors recognised the potential value of tourism and were influential in its development throughout the north of Ireland. They were able to develop and exploit the advantages of the Larne-Stranraer short sea route between Ireland and Scotland which would gain importance during World War II.<!-- Deleted image removed: -->

There had been a proposal by the Davison brothers of Ballymena to build a railway between Belfast and Ballymena in 1836 but this came to nothing due, firstly, to the inability to identify a suitable route out...
Read More