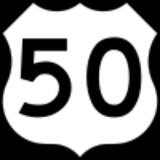 The following description of the Northwestern Turnpike is taken from Dr. J. M. Callahan's Semi-Centennial History of West Virginia, pages 106-9, published in 1913:

"The old Northwestern Turnpike, extending from Winchester, Virginia on a general westward course to Parkersburg, West Virginia on the Ohio, is a historic highway which deserves more mention than it has ever received as a factor related to the American westward movement and to the problem of communication between East and West. It was the inevitable result of the call of the West and the need of a Virginia state road."

"Perhaps its first suggestion was recorded by George Washington, who in 1758 had been the champion of the Braddock road (not then supposed to lie in Pennsylvania) and who in 1784 sought a route located wholly in Virginia. Returning from a visit to his western lands, after following McCulloch's Path (then the most important route across the rugged ridges between the valleys), he crossed the North Branch Potomac River on the future route of...
Read More