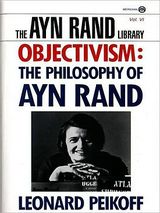 Objectivism: The Philosophy Of Ayn Rand

Objectivism: The Philosophy of Ayn Rand

Description:
Objectivism: The Philosophy of Ayn Rand is a 1991 book by philosopher Leonard Peikoff about the ideas of his mentor, Ayn Rand. Peikoff describes it as "the first comprehensive statement" of Rand's Objectivist philosophy. The book is based on a series of lecture courses that Peikoff first gave in 1976 and that Rand publicly endorsed. Peikoff states that only Rand was qualified to write the definitive statement of her philosophic system, and that the book should be seen as an interpretation "by her best student and chosen heir." The book is volume six of the "Ayn Rand Library" series edited by Peikoff.

The book is divided into 12 chapters. The first five chapters cover Rand's views on metaphysics and epistemology, which she considered the fundamental branches of philosophy. The remaining chapters cover Rand's views on ethics, politics and esthetics, which she considered to be derived from those fundamentals. An epilogue titled "The Duel between Plato and Aristotle" discusses Objectivism's philosophy of history.

Objectivism: The Philosophy of Ayn Rand was praised by many of Peikoff's fellow Objectivist thinkers as a comprehensive presentation of Rand's philosophy. In a review for the Objectivist magazine The Intellectual Activist, Harry Binswanger said the book provided the first "full, systematic, non-fiction expression" of Objectivism,...
Read More