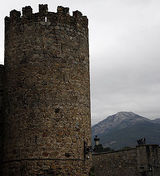 Its origins are in the historic Castile that was formed in the 9th century in the zone now comprised by Cantabria, Álava, and Burgos.

In the 18th century, Charles III of Spain assigned to the so-called kingdom of Castilla la Vieja the provinces of Burgos, Soria, Segovia, Ávila, Valladolid, and Palencia.

The royal decree of 30 November 1833, the reform of Javier de Burgos (see 1833 territorial division of Spain), established the basis for the division of Spain into provinces that, with a few modifications, continues down to the present day; this decree added the provinces of Logroño and Santander to Castilla la Vieja.

Another royal decree, on 30 November 1855, divided Spain into 49 provinces, and assigned the provinces of Valladolid and Palencia to the Kingdom of León, leaving to Castilla la Vieja only Santander, Burgos, Soria, Segovia, and Ávila. Although there were further reform efforts in the 19th century, this division is reflected in the encyclopedias, geographies, and textbooks from the mid-19th century until it was supreseded in the second half of the 20th century. For example, early editions of Enciclopedia Espasa, of the Encyclopædia Britannica and the popular student encyclopedia Álvarez all follow this division of provinces into Castilla la......
Read More