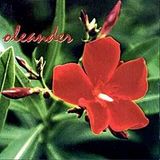 Description:
Oleander is a post-grunge band from Sacramento, California, USA. Its name is derived from the poisonous wildflower oleander, which line the highways of Northern California. In their nine years of activity, the band released four studio albums under various record labels. Their most successful effort, 1999's February Son, includes the hit single "Why I'm Here." Oleander went on official hiatus after the release and promotion of their fourth album, Joyride, in 2004. As of 2008, the group has reunited and is working on material for a new album.

In 1989, singer and guitarist Thomas Flowers met bassist Doug Eldridge; both of whom were employees of a Sacramento eatery. They played with several local bands together before meeting guitarist Ric Ivanisevich who joined them in a rehearsal. Chuck Combs the original drummer left, leaving the position to Fred Nelson Jr, a co-worker of Flowers' and Eldridge's.Stone, Adrianne Rolling Stone (February 24, 1999). Retrieved on 5-12-09. The quartet formed Oleander in 1995 and soon released an eponymous EP on the indie label Fine Records. This would be followed by a full-length album, Shrinking the Blob, in 1997.

The band then gave their CD to a friend who worked at 98-Rock KRXQ who began playing two of their songs on air. The track "Down When I'm Loaded" gradually became a regional hit, and after opening for Sugar Ray, Oleander was approached by a representative of Republic......
Read More