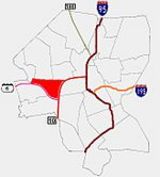 Description:
Olneyville is a neighborhood in Providence, Rhode Island bordered by Atwells Avenue to the north, U.S. Route 6 to the south and Rhode Island Route 10 to the east. The Woonasquatucket River runs through the southern portion of the neighborhood. The area is roughly triangular.

Olneyville Square is a major traffic intersection in Olneyville, defined by the intersection of Westminster Street, Broadway, Plainfield Street, and Manton Avenue.

Settlement in Olneyville began at Olneyville Square in the early 18th century. The area began as a center of trade with a nearby Narragansett village. Larger settlement began in 1785 after Christopher Olney, for whom Olneyville is named, founded a grist mill and a paper mill on a wide part of the Woonasquatucket River. Olney was a captain during the Revolutionary War and owned a 95 acre farm in the area. By the end of the American Revolutionary War, a forge and foundry and other small industries operated in Olneyville.

Through the mid-19th century, Olneyville developed as a railroad junction and mill district. This attracted many Polish immigrants. However, the mill industries declined after World War IIcausing economic decline. The construction of the Route 6 connector in the 1950s exacerbated these problems. In the two decades that followed Olneyville witnessed a substantial drop in its population.