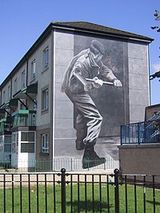 Description:
Operation Motorman was a large operation carried out by the British Army in Northern Ireland during the Troubles. The operation took place in the early hours of 31 July 1972 with the aim of retaking the "no-go areas" (areas controlled by Irish republican paramilitaries) that had been established in Belfast, Derry and other large towns.

The Northern Ireland riots of August 1969 marked the beginning of the conflict known as "The Troubles". As a result of the riots, Northern Ireland's two main cities—Belfast and Derry—had become more segregated than before. Many neighbourhoods became either purely Irish nationalist and republican or purely unionist and loyalist. In some places, residents and paramilitaries built barricades to seal-off and protect their neighbourhoods from incursions by "the other side", by the security forces, or both. These became known as "no-go areas".

By the end of 1971, 29 barricades were in place to block access to what was known as Free Derry; 16 of them impassable even to the British Army's one-ton armoured vehicles. Many of the nationalist/republican "no-go areas" were controlled by one of the two factions of the Irish Republican Army—the Provisional IRA and Official IRA. On 29 May 1972, the Official IRA called a ceasefire and vowed that it would only launch attacks in self-defence.