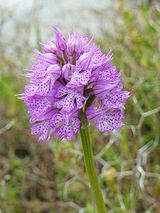 Description:
Orchis is a genus in the orchid family (Orchidaceae). This genus gets its name from the Greek όρχις orchis, meaning "testicle", from the appearance of the paired subterranean tuberoids.

This genus occurs mainly in Europe, NW Africa, and it stretches as far Tibet, Mongolia, China and Japan.

These terrestrial orchids have tubers instead of pseudobulbs. They are extremely diverse in appearance. They produce an erect stem. The inflorescence is a cylindrical to globular spike 5 – 15&nbsp;cm long with yellow, red to purple flowers. They start flowering at the base, slowly progressing upwards, except the Monkey orchid (Orchis simia) that flowers in reverse order.

The original genus Orchis used to contain more than 1,300 names. Since it was polyphyletic, it has been divided by Pridgeon et al., into several new genera (see Reference): Ponerorchis, Schizodium, Steveniella.