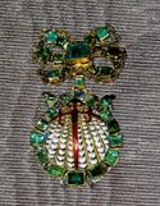 This article deals with the Spanish Order of knighthood. For the Portuguese Order, see Order of St. James of the Sword.

The Order of Santiago (, ) was founded in the 12th century, and owes its name to the national patron of Galicia and Spain, Santiago (St. James the Greater), under whose banner the Christians of Galicia and Asturias began in the 9th century to combat and drive back the Muslims of the Iberian Peninsula.

Santiago de Compostela, in Galicia, the centre of devotion to this Apostle, is neither the cradle nor the principal seat of the order. Two cities contend for the honour of having given it birth, León in the kingdom of that name, and Uclés in Castile. At that time (1157–1230) the royal dynasty was divided into two rival branches, which rivalry tended to obscure the beginnings of the order. The Knights of Santiago had possessions in each of the kingdoms, but Ferdinand II of León and Alfonso VIII of Castile, in bestowing them, set the condition that the seat of the order should be in their respective states. Hence arose long disputes which only ended in 1230 when Ferdinand III, the Saint, united both crowns. Thenceforth, Uclés, in Cuenca Province, was regarded as the headquarters of the order; there the grand master habitually resided, aspirants passed their year of probation, and the rich archives of the order were preserved until united in 1869 with the "Archivo Histórico Nacional" of Madrid. The order received its first rule in...
Read More