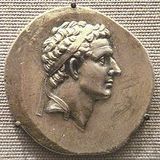 Description:
Orophernes Nicephorus (in Greek Oρoφέρνης Nικηφόρoς) was one of the two false sons whom Antiochis imposed upon her husband, Ariarathes IV, king of Cappadocia. On the birth, however, of a real son, named Mithradates (afterwards Ariarathes V), Orophernes, so that he might not set up pretensions to the throne, was sent away into Ionia. When Ariarathes V refused to marry the sister of Demetrius I Soter, king of Syria, the king supported the claims of Orophernes to the crown of Cappadocia.

In 157 BC, when Ariarathes had been deposed and had fled to Rome, Orophernes sent two ambassadors (Timotheus and Diogenes) to the capital city to join the emissaries of Demetrius in opposing his brother. According to Appian the Romans decided that the two claimants should share the throne between them.

We are told, however, that Orophernes did not hold the kingdom long, and it is alleged that his reign was signalized by a departure from the more simple customs of his ancestors and by the introduction of systematic debauchery. To supply his lavish extravagance, he oppressed and pillaged his subjects, putting many to death and confiscating their property.

He deposited 400 talents with the citizens of Priene as a resource in case of a reversal of fortune, but the Priennians later returned the money.

When Orophernes' business affairs were on the decline, he became alarmed that his soldiers might mutiny over unpaid wages so he plundered an ancient temple of Zeus to pay them off....
Read More